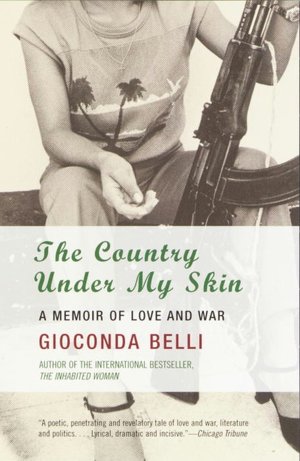 Belli, Gioconda: The Country Under My Skin: A Memoir of Love and War (2002)

Review: © Publishers Weekly: Belli’s upper-class Nicaraguan family was unsympathetic to the Somoza dictatorship, but would have been shocked to learn that their 20-something daughter was joining the underground Sandinistas even as she worked her bourgeois day job at a prestigious advertising agency. This lush memoir follows Belli from her sterile marriage to her first affair, from her first published poem to her first subversive act, and then through a series of exiles, until her triumphant return to her liberated homeland… only to face another struggle to liberate her own heart. The account is both intensely personal and informatively political. Belli (The Inhabited Woman) was no mere sympathizer or mistress to a compañero but an active militant and strategist in her own right. She smuggled weapons, ran roadblocks, formed factions with revolutionary tendencies, argued strategy with Castro and represented liberated Nicaragua at Third World conferences from Moscow to Tripoli. An honest, insider’s account of the very real debates surrounding this major revolution would be valuable in itself, but Belli offers more: a frank examination of her own struggle for love. Only after a series of disastrous affairs does she realize she must stop adjusting herself to how she expects her lover will react and just be herself. Next to the monumental upheavals of the Sandinistan revolution, such personal revelations may seem minor, but to Belli and her compañeras, the battle was only half won if women were again relegated to mistress-to-the-mighty status. Belli shares her story in some 50 brief chapters, each subtitled to foreshadow content-an oddly reassuring format.